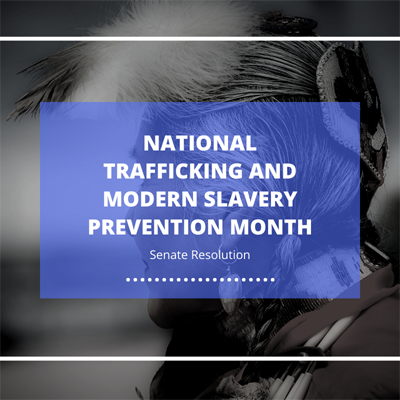 On January 28, 2020, U.S. Senators Dianne Feinstein (D-CA), Lisa Murkowski (R-AK) introduced a resolution in support of National Trafficking and Modern Slavery Prevention Month. The resolution works to raise awareness by highlighting how prevalent cases are in the U.S. as well as identifying solutions to combat human trafficking. U.S. Senator Dan Sullivan (R-AK) is an original cosponsor.

[The full text of the resolution can be found here.]

"Human trafficking and modern-day slavery are scourges on our society that must end,” said Senator Feinstein. “Turning a blind eye to sexual exploitation and forced labor won’t hide the fact these heinous acts still happen in our country. We have a responsibility to speak out and tell victims that we know about this problem, we see them and we support them. That’s what our resolution does.”

“The human trafficking industry generates an estimated $150 billion in illegal profits a year and is rapidly increasing across the nation. In fact, in Alaska it is the second fastest growing crime in our state. It is one of the most evil and sickening crimes imaginable, and it is happening in plain sight,” said Senator Murkowski. “Education and awareness are key steps in addressing human trafficking. Our efforts to put an end to these heinous crimes must be year-round, but I am glad to join Senator Feinstein in this resolution to raise awareness on the high rates of human trafficking of Alaskan Natives and to recognize January as National Trafficking and Modern Slavery Prevention Month.”

“It’s sickening that thousands of individuals in our own country, including children, are ensnared in what amounts to a form of slavery,” said Senator Sullivan. “We need to do all we can to stop it. I believe that one of the best weapons we have against human trafficking is exposure and sunlight. Our hope is that when Americans know that this crisis exists in our communities and our neighborhoods, good citizens across the country will recognize the signs and help vulnerable adults and children escape the clutches of a trafficker. I’m proud to join my colleagues in advancing this resolution to shine a light on the scourge of human trafficking.”

“A powerful and critical component to healing is seeing oneself as worth justice and worth the freedom that we are fighting for on their behalf. Yes, I will be reading this bill to our Priceless survivors of sex trafficking. They need to see it and hear it,” said Priceless Executive Director, Gwen Adams.

“As key providers of victim centered care, forensic nurses believe that addressing human trafficking requires the support and collaboration of everyone.  Key success factors include a unified and coordinated response among all agencies and communities to address recognition, identification and concerted response that offers recovery and hope for victims,” said the Academy of Forensic Nursing.

"We stand with all survivors of trafficking, especially Native women and girls who have a heightened risk for becoming victims of sex trafficking. The support and leadership of our lawmakers like Senator Murkowski, Senator Feinstein, Senator Grassley, and Senator Udall are key to strengthening tribal, state, federal, and international responses to end trafficking of the estimated 40 million trafficking victims across the globe," said Executive Director of the National Indigenous Women’s Resource Center, Lucy Simpson.

"In Alaska 28 percent of the youth at Covenant House Alaska, a youth shelter, were survivors of human trafficking and Alaska experiences the most heinous cases of sex trafficking in the nation. According to the researcher, Dr. Laura Murphy of Loyola University’s Modern Slavery Research Project, Alaska had the most brutal cases of sex trafficking – worse than the big, crime-filled cities of Los Angeles, Detroit, New Orleans and even New York.[1] We thank Senator Murkowski and the Senate leadership in recognizing the importance of educating about the crime of trafficking and advancing improvements to the law as our native women and girls are some of the most vulnerable and are targeted by traffickers," said Executive Director of the Alaska Native Women's Resource Center, Tami Truett Jerue.

[The original press release announcement can be found here.]