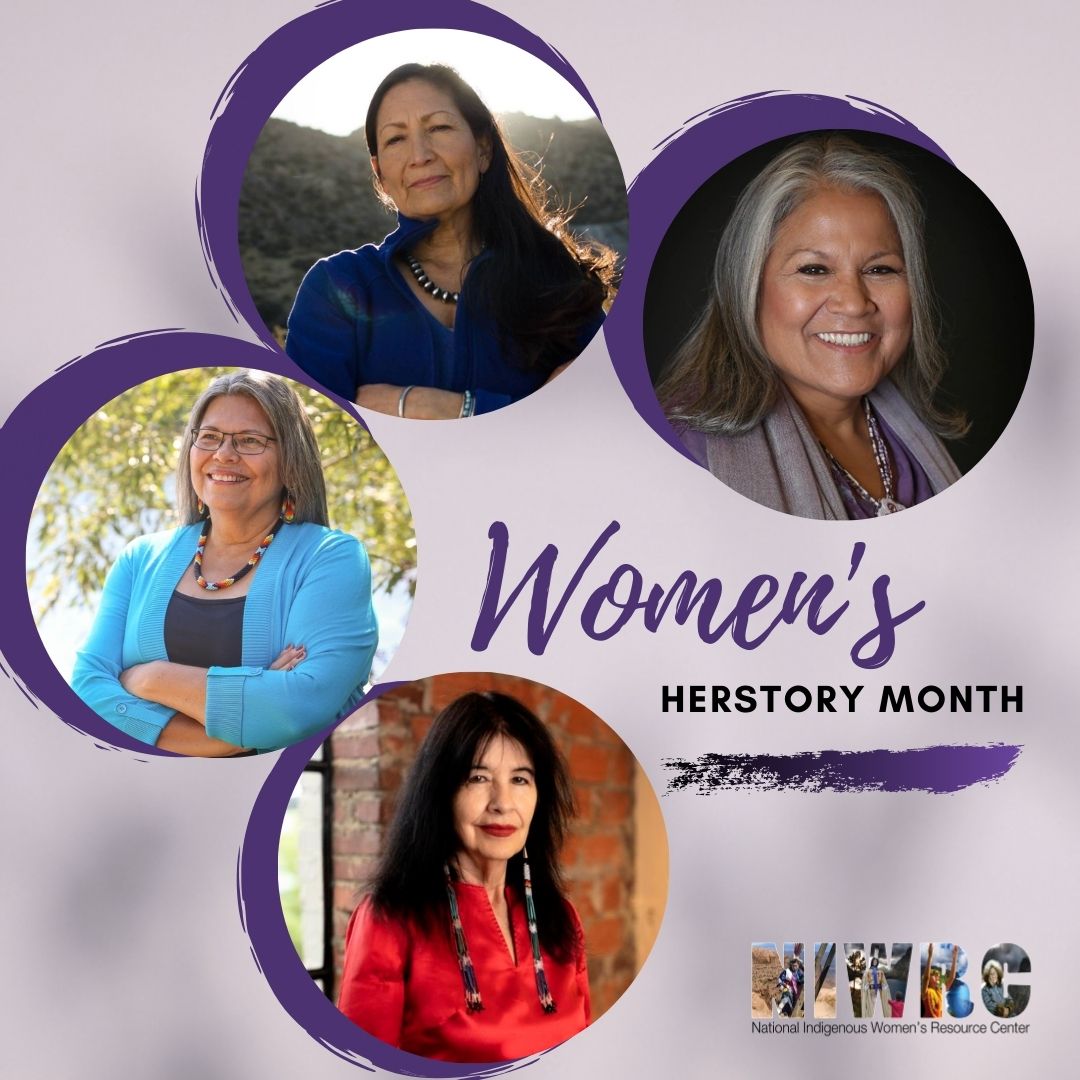 This March, the National Indigenous Women’s Resource Center (NIWRC) is lifting the voices, expertise and accomplishments of Indigenous women leaders in recognition of Women’s Herstory Month and International Women’s Day on March 8. Women, as leaders, nurturers, protectors, survivors, and knowledge-keepers, are honored and valued in Indigenous communities. For generations, Indigenous women have carried forward the next generation, physically and spiritually, and helped keep our cultural traditions alive. Women are sacred.

Women remain the backbone and hearts of our families and communities. This month serves as a call to action to uplift and celebrate the women in your life and honor their resilience, endurance, wisdom, compassion, and courage. It is time to honor the voices, leadership and accomplishments of Indigenous women everywhere.

Join us in honoring all of the Indigenous women who embody our Indigenous values of compassion, respect, generosity, humility, fortitude and love this month, and on International Women’s Day, March 8. NIWRC would also like to acknowledge the accomplishments of the following Indigenous women who have made lifting Indigenous people’s rights and sovereignty their lifeway. These women, acting as relatives, show us the strength of the feminine spirit. Lifting the voices and stories of these Indigenous women inspires the next generation of Native women and girls to call for change for Indigenous communities around the world.

Deb Haaland is an enrolled member of the Pueblo of Laguna, and also has Jemez Pueblo heritage. As a single mother, she volunteered at her daughter's preschool in order to afford an early childhood education. Like many New Mexicans, she had to rely on food stamps at times as a single parent, has lived paycheck-to-paycheck, and struggled to put herself through college. Though hard work and determination, she earned degrees from the University of New Mexico and UNM Law School. For several years, she ran her own small business producing and canning Pueblo Salsa and later became the first Chairwoman elected to the Laguna Development Corporation Board of Directors, overseeing business operations of the second largest tribal gaming enterprise in New Mexico. Deb successfully advocated for the Laguna Development Corporation to create policies and commitments to earth-friendly business practices. Deb is a former tribal administrator and has administered a local service provider for adults with developmental disabilities. She has traveled to Standing Rock to stand side-by-side with the community to protect tribal sovereignty and advocate vital natural resources. After a lifetime of organizing communities to stand up for New Mexico families, now Congresswoman Deb Haaland was elected as one of the first Native American women to serve in Congress. She will serve in leadership roles as the 116th Congress Freshman Class Representative to the House Democratic Steering and Policy Committee, House Democratic Region VI Whip (Texas, New Mexico, and Arizona) and Deputy Whip for the Congressional Progressive Caucus. President Joe Biden has nominated Haaland as Secretary of the Interior. If confirmed, she would be the first Native American to head the department as well as be the first Native American Cabinet secretary in U.S. history.

Beverly Kiohawiton Cook is currently serving her third term as an elected Chief on the Saint Regis Mohawk Tribal Council. Beverly is a Family Nurse Practitioner, is a prominent voice in the mind-body medicine approach to restoring wellness, reproductive health and environmental justice for Mohawk people. Since her election to Tribal Council in 2013, Chief Cook has been selected by United South and Eastern Tribes (USET) to represent the Nashville Area (which includes NYS Tribes/Nations) on the National Indian Health Board (NIHB), National Institutes of Health Tribal Advisory Committee (NIH TAC), Substance Abuse And Mental Health Services Administration Technical Tribal Advisory Committee (SAMHSA TTAC). Most recently she was asked to serve as Co-Chair on the NCAI Climate Change Summit Committee. At home, she is a member of the Three Sister’s Advisory Board and championed the Akwesasne Child Advocacy Center that provides victim-centered care for abused children. Chief Cook has been a valuable supporter of the Tribe’s Summit committee (formerly the Child Safe Summit Committee) focusing on establishing tools and resources that support trauma-informed and resilience building practices within tribal programs and in the workplace.

Joy Harjo is an internationally renowned performer and writer of the Muscogee (Creek) Nation. She is serving her second term as the 23rd Poet Laureate of the United States. The author of nine books of poetry, including the highly acclaimed An American Sunrise, several plays and children's books, and two memoirs, Crazy Brave and Poet Warrior: A Call for Love and Justice, her many honors include the Ruth Lily Prize for Lifetime Achievement from the Poetry Foundation, the Academy of American Poets Wallace Stevens Award, two NEA fellowships, and a Guggenheim Fellowship. As a musician and performer, Harjo has produced six award-winning music albums including her newest, I Pray for My Enemies (Sunyata Records). She is Exec­u­tive Edi­tor of the anthol­o­gy When the Light of the World was Sub­dued, Our Songs Came Through — A Nor­ton Anthol­o­gy of Native Nations Poet­ry and the editor of Living Nations, Living Words: An Anthology of First Peoples Poetry, the companion anthology to her signature Poet Laureate project. She is a chancellor of the Academy of American Poets, Board of Directors Chair of the Native Arts & Cultures Foundation, and holds a Tulsa Artist Fellowship. She lives in Tulsa, Oklahoma.

Sherrill Elizabeth Tekatsitsiakwa (Katsi) Cook is an enrolled member of the Saint Regis Mohawk Tribe. Katsi grew up in the Akwesasne community on the St. Regis Reservation, which straddles the U.S. – Canada border along the St. Lawrence River. Katsi has led her people in a wide array of initiatives at the intersection of women’s reproductive health issues and environmental justice. She is widely recognized for her pioneer study of the impact of PCBs and heavy-metal pollutants on the breast milk of Native women in Great Lakes Indian communities. That study led her to the realization that informs all her work: “Women are the first environment.” A midwife and women’s health advocate through the lifecycle, she is especially interested in helping Native American women and girls develop control of their reproductive power and voices. Katsi bases her midwifery in Indigenous ancestral knowledge. A founder of the National Aboriginal Council of Midwives, she has worked to return Native knowledge of birthing to Native peoples, so that births can again take place in their own communities with the wisdom of their cultures. At home, Katsi is a founding member of Konon:kwe (“women”) Council and the director of Spirit Aligned Leadership Program, which elevates the lives, voices, and dreams of Indigenous Elder women who are working to heal, strengthen and restore the balance of Indigenous communities.