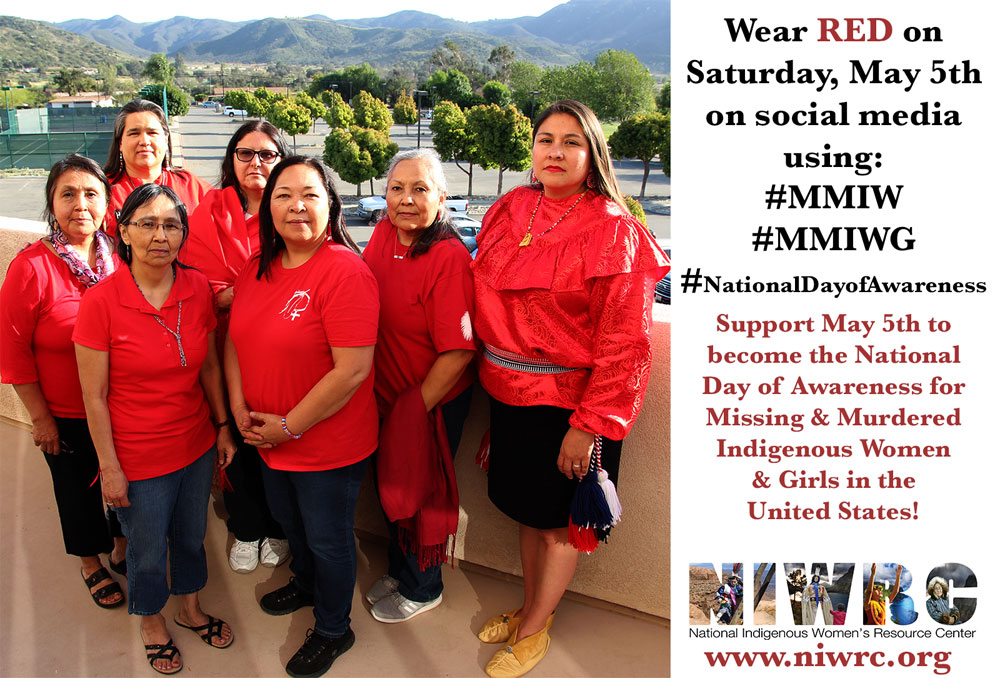 This Saturday, May 5th, 2018 the National Indigenous Women’s Resource Center supports grassroots to National policy level organizing efforts that seek to address the horrific ongoing violence committed against Native women and girls, particularly the reports of those missing and murdered. This year, the United States Senate passed a co-sponsored resolution declaring Saturday, May 5th, 2018 as a National Day of Awareness for Missing and Murdered Native Women.

We thank you for your support for the 2017 National Day of Awareness and we are pleased to let you know the May 5th, 2017 National Day of Awareness reached millions of people across the United States and the world through social media platforms, community actions, and heartfelt prayers at vigils across tribal communities. This public response demonstrates increased awareness is needed and is indicative of the extent of the reality that Native women go missing on a daily basis often without any response by law enforcement or by media outlets.

Many times, media organizations utilize stereotypes and misinformation when reporting on issues relating to American Indians or Alaska natives. It is imperative that we own the narrative and that our voices are heard above all others when a person is missing/murdered. It is also critical to inform, maintain and increase public awareness.

“The legacy of genocide is the epidemic of violence we experience from birth to death. For our Native sisters who are missing and murdered, we need every person to take a stand and join in our effort calling for justice.” Cherrah Giles, NIWRC Board President.

The National Indigenous Women’s Resource Center calls for prayer and healing in response to the violence committed against American Indian and Alaska Native Women across the United States. As we acknowledge as a country this crisis and the changes urgently needed to save lives and respond to this reality we begin the process of removing barriers to the safety of Native women and strengthening the ability of Indian nations to protect women.

We are all sacred. We must be treated with dignity and with respect. The issue of missing and murdered native women should receive an adequate response from law enforcement and prosecutorial bodies. As the life-givers of our communities, our sovereignty very literally depends on it.

Resources for Missing and Murdered Indigenous Women and Girls: