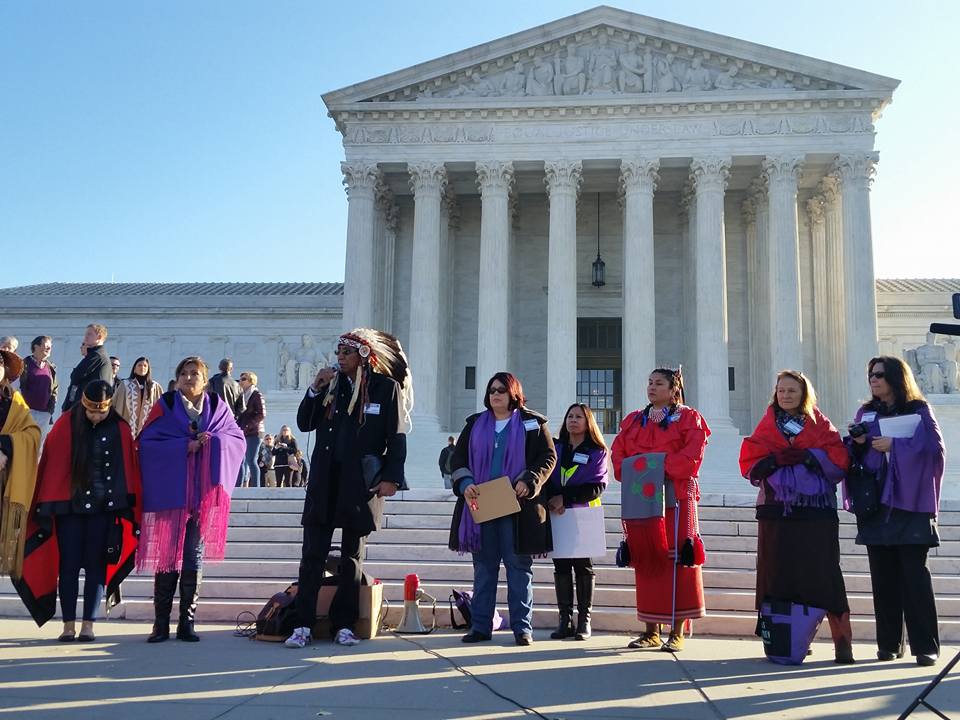 (Lame Deer, MT) Today the National Indigenous Women’s Resource Center (“NIWRC”) files an amicus brief in support of the United States Department of Justice, asking the United States Supreme Court to reverse the Ninth Circuit Court of Appeals’ decision in United States v. Bryant. The NIWRC is joined by thirty-four additional organizations that work to end domestic violence nationwide. Collectively, the NIWRC and their fellow Amici urge the Supreme Court to uphold the application of the Habitual Offender Provision (§ 117(a) of the Violence Against Women Act (“VAWA”)) to sustain the conviction of defendant Michael J. Bryant (“Bryant”).

Section 117(a) was added in the 2005-06 reauthorization of VAWA. “The protections in the Habitual Offender Provision are critical to ensuring the safety of Native women,” explains Carmen O’Leary, NIWRC Board Member and Executive Director of the Native Women’s Society of the Great Plains. “Our women are battered and abused by their intimate partners at rates higher than any other population in the United States.”

“What’s more,” adds NIWRC Board Member Randi Barreiro, “is that domestic violence is hardly ever a one-time occurrence. Most offenders engage in a pattern of intimidation and control that escalates in severity over time.”

Prior to the passage of the Habitual Offender Provision in VAWA 2005, federal law limited the ability of Tribal Governments, as well as the Federal Government, to successfully intervene and prevent the escalation of domestic violence against Native women. Specifically, the Indian Civil Rights Act prohibited Tribal Governments from sentencing offenders convicted of domestic violence crime to anything longer than one year in prison. Furthermore, statutes like the Major Crimes Act and Public Law 280 often prevented the Federal Government from prosecuting individuals who abuse Native women.

“Prior to the passage of § 117(a), many Native women survivors existed in a legal loophole, where as a result of federal law, no sovereign government had the authority to sentence a perpetrator to a term of more than one year for his repeated acts of violence against a Native woman,” states Mary Kathryn Nagle, attorney for NIWRC and partner at Pipestem Law, PC.

Bryant exemplifies the problems inherent in a legal framework that limits both the Tribal Government and Federal Government to imposing nothing more than a slap on a wrist. Despite hundreds of convictions and hundreds of contacts with Tribal Police, Bryant continued to abuse numerous Native women.

Over the past seventeen years, he has hit, strangled, kneed, kicked, and bit Native women. In 1999, he strangled his girlfriend at the time and smashed a beer bottle on her head. In 2007, he punched and kneed a girlfriend in the face. More recently, in February 2011, he grabbed his then-girlfriend, pulled her hair, repeatedly punched her in the face and chest, repeatedly kicked her, bit her fingers, and threatened her. In May of that same year, Bryant violently assaulted another woman who was living with him at the time. One morning, when he awoke and could not find his truck keys, he grabbed his victim with both hands and strangled her until she almost passed out.

These stories are only a small part of the picture. The full record identifies many more victims; Bryant has been convicted of committing crimes of domestic violence in January 1998, July 1998, March 2002, September 2002, July 2003, and February 2005, in addition to his most recent 2011 conviction in the United States District Court, District of Montana.

Bryant does not deny that he abuses women. Instead, he has attacked the constitutionality of the Federal Government’s prosecution of him based on the fact that his prior Tribal Court convictions for misdemeanor domestic violence crimes did not provide indigent counsel. “Tribal Governments, like all other sovereign governments, know best how to balance the rights of their women to be free from domestic violence with the rights of the accused perpetrators to be treated fairly and afforded due process,” states Nagle. “The absence of indigent counsel in Bryant’s preceding Tribal Court convictions in no way constitutionally precludes the Federal Government from subsequently exercising criminal jurisdiction over him for his latest, and hopefully his last, violent assaults perpetrated against Native women.” NIWRC, therefore, urges the Supreme Court to uphold the constitutionality of the application of the Habitual Offender Provision to Bryant and, accordingly, overturn the decision of the Ninth Circuit.

“We as Native women are faced with our own mortality every day, from the sexual assaults, stalking, domestic violence, human trafficking and murder, the rates of violence against us far exceed all other groups in this country,” states Lisa Brunner, Survivor and Executive Director of Sacred Spirits First Nations Coalition. “My question has and continues to be: When will the courts of the United States uphold the ability of the U.S. Congress and our own sovereign Indian Nations to protect us?”

“The NIWRC’s mission is to end violence against Native women,” states NIWRC Board President Cherrah Giles. “We know this violence won’t end if the individuals who are convicted of beating and abusing our women are never given anything more than a slap on the wrist.”

NIWRC files this brief as a part of its VAWA Sovereignty Initiative, a project focusing on the defense of the constitutionality and functionality of all VAWA tribal provisions. This Initiative is the NIWRC’s next step forward in defending the 2013 VAWA reauthorization and other important advancements in federal law and policy related to the protection of Native women and children.