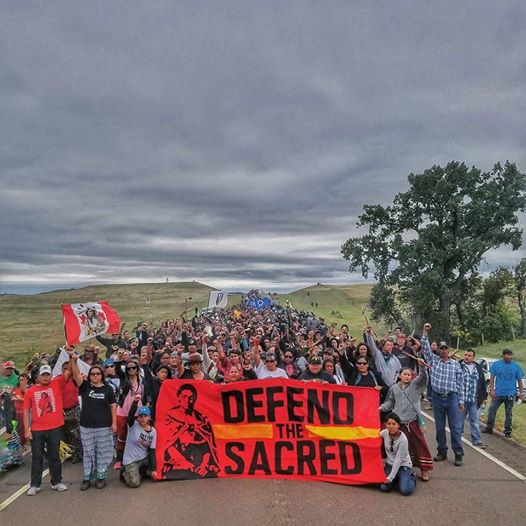 To all of our Partners and Allies-

Sign onto NIWRC Amicus Brief in Standing Rock Case:
The National Indigenous Women’s Resource Center (NIWRC) will be filing an amicus brief in the D.C. Circuit Court of Appeals to support the Standing Rock Sioux Tribe in their fight to stop a pipeline that threatens their water, sacred sites, and ultimately, the health and welfare of their entire Nation.  We are asking all organizations who joined us in signing onto the Dollar General amicus brief to join us now, and sign onto this brief as well. Please sign on by clicking on the link here: https://goo.gl/forms/CHhMpVBaNw2isxMK2

If you wish to sign your organization onto the NIWRC amicus brief, please be sure to click on the above link and sign up NO LATER than September 30. Due to time constraints, we cannot guarantee that entries received after September 30 will be added to the brief.

Background on Legal Case:
The Standing Rock Sioux Tribe (SRST) filed a lawsuit against the U.S. Army Corps of Engineers in relation to the Dakota Access Pipeline (DAPL).  The litigation involves two broad issues surrounding the proposed construction of a major crude-oil pipeline that passes through the Tribe’s ancestral lands.  First, the pipeline would pass under the Missouri River (at Lake Oahe) just a half a mile upstream of the tribe’s reservation boundary, where a spill would be culturally and economically catastrophic.  Second, the pipeline would pass through areas of great cultural significance, such as sacred sites and burial grounds that federal law seeks to protect.  You can read more about the lawsuit here: http://earthjustice.org/features/faq-standing-rock-litigation.

SRST filed a motion for preliminary injunction in the United States District Court, District of Columbia. On September 9, 2016, the federal Judge presiding over the case denied SRST’s motion. As a result, the pipeline company (Energy Transfer Partners) is free to continue to construct on—and destroy—the Tribe’s sacred sites east and west of the Missouri River. SRST has filed an appeal to the D.C. Circuit Court of Appeals, and after SRST files its brief on the merits, NIWRC will file an amicus brief in support.

As sovereign Nations, the Tribes in North Dakota have an inherent right to protect their women and children from anyone or anything that threatens to bring crime onto tribal lands.  But when Native Nations are excluded from the federal consultation process, they lose any and all meaningful opportunity to consult on the harmful effects a pipeline will have on their land, water, and ultimately—the lives of their citizens. Congress created the § 106 consultation process to honor and respect the sovereign government-to-government relationship between the United States and Native Nations. As Trustee to Native Nations, the Federal Government has a duty and an obligation to fully engage Native Nations in the § 106 consultation process and consider all concerns Native Nations voice—including, and not limited to, the increased violence and assaults their women and children will face if the Federal Government issues the permits necessary to allow this pipeline to cross the Missouri River.

The NIRWC amicus brief will be co-authored by Mary Kathryn Nagle and Sarah Deer, and will be filed by Pipestem Law P.C.

Who Can Sign Onto the NIWRC Amicus Brief?
Organizations committed to ending domestic violence, sex trafficking, and/or sexual assault are welcome to sign onto the NIWRC amicus brief.  Your organization does not need to be Native to sign onto the brief. By way of example, we had numerous non-Native organizations join us as allies on our Dollar General brief and their advocacy lent a significant amount of support.