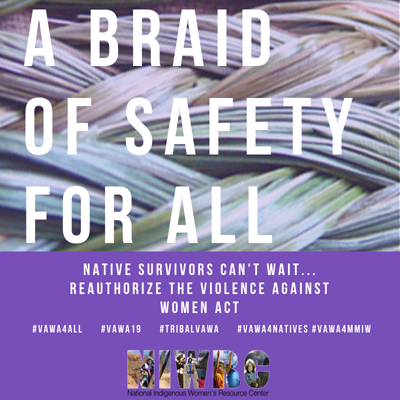 Yesterday, Senator Joni Ernst (R-IA) introduced new Republican VAWA legislation that would leave Native women less protected from violent offenders by destabilizing tribal courts and infringing on tribal sovereignty. After the failure of bipartisan negotiations, Senator Ernst took the lead to introduce this highly problematic language despite hearing concerns during several meetings with Native women, tribal leaders, and tribal organizations. This legislation, if enacted, would destabilize tribal justice systems by imposing undue burdens and restrictions on tribal courts far beyond those imposed on federal and state courts, including audits by the Attorney General and leaves Tribes vulnerable to lawsuits by defendants of tribal courts through the stripping of sovereign immunity. Ultimately, this bill would eliminate the gains made in VAWA 2013 and infringes on the inherent tribal authority of tribal nations to prosecute crimes committed against their citizens on tribal lands.

Although partisanship has unfortunately introduced itself into VAWA discussions among certain key Senate voices, there is clear hope that partisanship will not prevail among those who seek to protect women and children throughout Indian country and rural America, where the majority of tribal courts preside and provide protections to Indians and non-Indians alike.

Senator Ernst’s bill puts a partisan spin on a non-partisan issue. Senator Ernst’s bill includes the expanded jurisdiction over covered crimes, yet strips tribal court authority at the same time, while providing for increased authorization amounts for grants to Tribes, and several marker bills in an attempt to garner tribal support. Safety for Native women is not a partisan issue, and nothing can serve as a bargaining chip for the safety of Native women and the restoration of tribal sovereignty.

In contrast to the legislation Senator Ernst has introduced, the House version of VAWA, H.R. 1585, passed with significant bi-partisan support and Senate Bill 2843, introduced on November 13, 2019, includes the tribal provisions that national, regional, and local tribal organizations have worked hard for. There is no reason to substitute the language in H.R. 1585 and S. 2843 with language that will preclude tribal courts, and ultimately tribal nations, from protecting their most vulnerable populations, Native women and children. We cannot go backward and introduce VAWA provisions that destabilize and limit the inherent authority of tribal nations.

“Despite the fact that the implementation of VAWA 2013 has been a success—both for the protection of victims in our communities as well as the due process rights of non-Indian defendants—Ernst’s bill is based on the assumption that the protections for Native victims in VAWA 2013 must be rolled back because tribal courts are not capable of fairly administering justice," said Mary Kathryn Nagle, Partner, Counsel, National Indigenous Women’s Resource Center. "Since 2013, tribes have clearly demonstrated this assumption to be false. Tribal courts prosecuting non-Indian defendants already provide the same—if not more—due process rights than state and federal courts. Placing paternalistic restrictions on tribal courts in the name of 'due process' is nothing more than a disguise for prejudice. Legislation that strips tribal courts of their inherent authority to protect victims in their communities based on prejudice alone must be stopped."

“NIWRC looks forward to engaging in continued dialogue with Senate Republicans and Democrats regarding the need to protect Native women. The Ernst bill was unfortunately drafted in a process that excluded the voices of our tribal leaders and our Native women survivors.” said NIWRC Board Member Deborah Parker. “This process has resulted in a bill, that in its current form, would constitute a significant rollback of the protections that VAWA 2013 provided to Native women. We cannot afford to step back. We can only move forward.”

“We are deeply disappointed by the VAWA legislation introduced by Senator Ernst," said Chairwoman Teri Gobin, Tulalip Tribes. "The bill erodes tribal sovereignty and attacks the independence of our tribal judicial systems, and would prevent us from protecting our woman and children from perpetrators. And certainly, we will not allow non-VAWA specific legislation be used as a bargaining chip when it comes to protecting our women and children. The public safety of our communities is of the utmost importance for all citizens, and we urge all Senators to support S.2843, the Senate companion to the bi-partisan bill passed by the House last April.”

“Tribal issues are nonpartisan issues. As a Native woman and a survivor, I call on the Senate to stand with Native women and survivors and not allowing partisan politics to get in the way of protecting the safety of Native women and the sovereignty of tribal nations," said Cherrah Giles, Chairwoman, National Indigenous Women’s Resource Center. "NIWRC remains committed to working with senators on both sides of the aisle to enhance safety for Native women.”

NIWRC remains hopeful that the Senate will be able to pass a bipartisan reauthorization of VAWA that protects tribal sovereignty, instead of diminishing it, and thereby increasing safety for Native women and children.