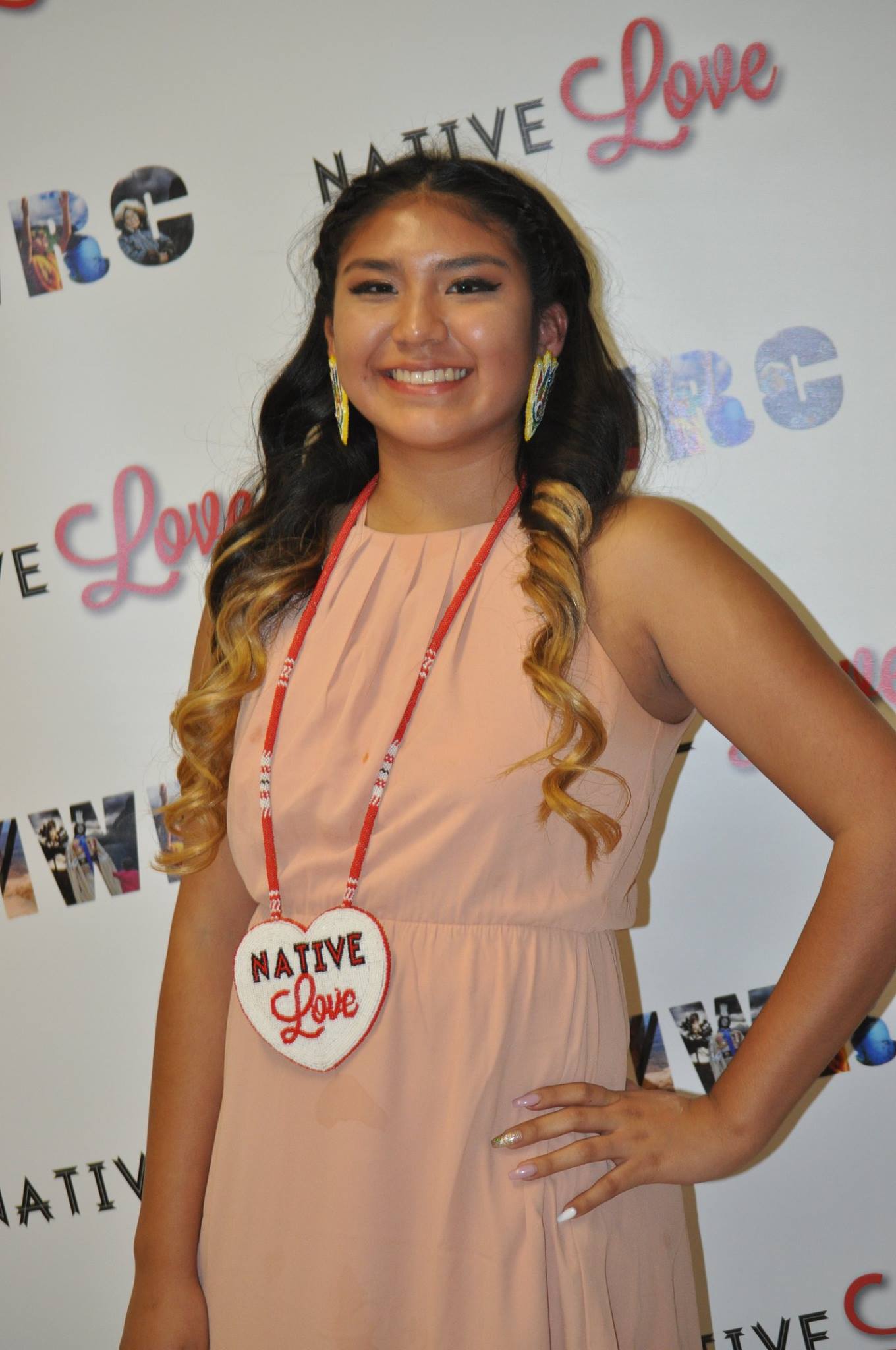 “It’s not everyday a national organization comes to our community,” Faith Morreo, Kristen’s mother, said. “We wanted to do this right for my daughter.” Morreo, members of the Cahuilla Tribal Council and the Elders Council welcomed NIWRC staff with introductions to community members to the celebration of her daughter.

The smell of pizza permeated the community room along with a chocolate strawberry sheet cake, drinks and NativeLove-inspired decorations on the walls and on the tables. Many Cahuilla leaders, community members, men, elders, youth, families as well as members of Kristen Butcher’s family were in attendance for a total of about 50 throughout the evening.

A traditional prayer by Cahuilla Elder Tribal Council member and community elder, Christina Morreo opened the space followed by a Cahuilla song and dance. The Torres Martinez Bird Singers, led by Derek Duro, shook rattles and sang songs of celebration while Kristen Butcher along with women and youth in the community danced along. NIWRC staff and NIWRC Board Treasurer Wendy Schlater also participated in a dance.

Schlater (representing the Southwest region of NIWRC) brought her mother to the celebration and introduced the overall organization goals of NIWRC as a resource center serving tribal coalitions and programs to end violence in our communities to the crowd.  “We want to challenge the stereotypes of what Native Love is. What we often hear as a joke is Native Love is a hickey and a black eye. We want to present the opportunity for tribal people to define what Native Love is and give them a means for their voice to be heard.”

Rebecca Balog, Native Love representative, thanked the community and congratulated Kristen Butcher for winning the NativeLove challenge. “Kristen’s winning message really represented exactly what NativeLove is about,” Balog said, “Because of Kristen’s impressive leadership activities in her own community, the NIWRC would like to name her as our first NativeLove Youth Ambassador. The ambassador will represent NativeLove in her community and to the nation at large with future duties to be announced.”

The NIWRC staff, as the NativeLove Team, initiated a conversation with the community about healthy relationships in their community in recognition of February’s Teen Dating Violence Awareness Month. Elders shared their experiences about learning about love from the generation before them; how it was difficult for their parents to accept love by means of hugs and learning how to say or hear "I love you" aloud with restraint, most likely stemming from boarding school experiences. The actual word for love in Indian, in this community and many other tribal languages did not directly translate.  This a recent phenomenon as traditionally, there was no word for love in the Cahuilla language, explaining it as an Anglo tradition.

The rest of the celebration included a community building exercise from infant to elder, a basketball challenge and NativeLove t-shirt giveaway and many red road/red carpet photography moments where community members wrote and held a sign of what NativeLove means to them. The NativeLove Challenge of 2015, photo and videos of youth holding signs or sharing what NativeLove means to them is the way NIWRC met Kristen. Kristen received the number one position by social media votes of the 2015 challenge.

For more information about the NativeLove, to schedule a training or presentation with the youth in your community, contact Rebecca Balog at rbalog@niwrc.org.