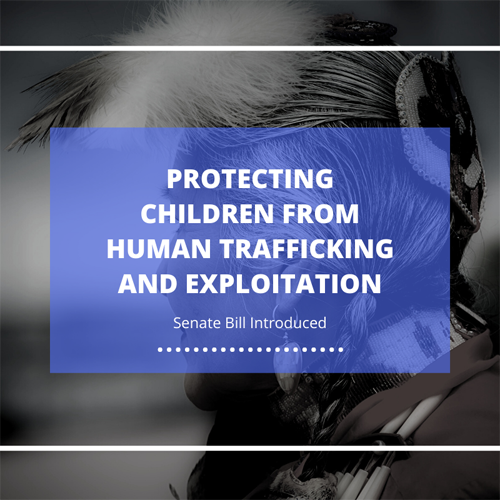 Equipping Individuals to Recognize, Prevent and Respond to Signs of Human Trafficking

According to the United Nations Children’s Fund (UNICEF), every two minutes a child is being victimized for sexual exploitation. U.S. Senators Lisa Murkowski (R-AK) and Tina Smith (D-MN) introduced the Human Trafficking and Exploitation Prevention Training Act of 2020, which would prevent the human trafficking and exploitation of children by providing grants critical for training students, parents, teachers, and school personnel to understand, recognize, prevent, and respond to signs of human trafficking.

Specifically, the bill would issue grants to non-profit organizations and schools to develop and implement age-appropriate, culturally competent, and gender-responsive curriculum, all while prioritizing geographic areas with the highest prevalence of human trafficking.

“The thought of anyone, let alone a child, falling victim to the sick and inhumane crime of human trafficking is unthinkable. Locations such as group homes, bus stops, playgrounds, and local malls have become stalking grounds for predators to prey on youth. They are disappearing in plain sight, but with the right tools and resources in place, we can fight back. By better equipping school faculty members, teachers, and even the kids themselves, we can help ensure children are not imprisoned in these traps,” said Senator Murkowski, a member of both the Senate Indian Affairs and Health Committees, “I’m encouraged by the legislation that Senator Smith and I have worked together to introduce and hope it will continue to gain bipartisan momentum. If there’s anything we should all be able to get behind—it’s protecting our children.”

“Human trafficking is a serious issue in Minnesota—particularly for Native communities—and my office heard from survivors, advocates, and law enforcement about the need for additional resources to combat this egregious crime,” said Senator Smith, a member of both the Senate Indian Affairs and Health Committees. “Our bipartisan bill would set up a pilot program to train students, teachers, and school personnel to recognize, prevent, and respond to signs of human trafficking and child exploitation. Our hope is that through this program, we will increase community awareness about this issue and improve operations to combat trafficking nationwide.”

“As an organization that has been fighting against human trafficking in the State of Alaska since 2011, Priceless wholeheartedly endorses this companion legislation. I cannot begin to express how this legislation will be a huge benefit to those of us on the front lines. We believe that the next, most crucial component in the fight is the missing education piece. Our own internal findings show that over 80 percent of our trafficking survivors did not know they were being trafficked during the recruitment phase. Also, that same 80 percent would have reached out to a trusted adult if they would have had one who they believed would not ‘get them in trouble’. Those two statistics can be erased with education and open conversations in our school systems,” said Priceless Executive Director, Gwen Adams of Alaska.

“Prevention is a core pillar of Shared Hope International’s work to end child sex trafficking. Through our years of research and work with the field, we have seen the impact of trafficking on school age children. Promoting trafficking education and training in schools will equip children and those in a position to protect them with knowledge about trafficking and exploitation that will help stop trafficking before it happens and prevent further harm to children who have been exploited. Shared Hope thanks Senators Murkowski and Smith for introducing the Human Trafficking and Exploitation Prevention Training Act of 2020, taking this critical step toward preventing trafficking and exploitation and reducing the tide of victimization,” said Founder and President of Shared Hope International Congresswoman Linda Smith (1995-8).

“Public schools are uniquely positioned to identify and support children and youth who are at great risk of human trafficking, including children and youth experiencing homelessness. The Human Trafficking and Exploitation Prevention Training Act of 2020 will help schools, communities, and the nation identify successful strategies and best practices to prevent and respond to the human tragedy of human trafficking, engaging students, students, parents, teachers, and school personnel as key partners in the effort. As leaders on the early care and education of children and youth experiencing homelessness, SchoolHouse Connection offers our full support of this critically important legislation,” Executive Director of SchoolHouse Connection, Barbara Duffield.

“The Selah Way Foundation and Selah Freedom fully endorse Senator Murkowski's and Senator Smith's efforts to combat sex and human trafficking the United States. This bi-partisan bill will support a unique and effective program to educate American children about the dangers of sex trafficking, and the techniques perpetrators use to lure innocent children into trafficking,” said CEO and Co-Founder of the Selah Way Foundation and Selah Freedom, Elizabeth Melendez Fisher Good.

[For a one-pager fact sheet of the legislation, click here.]

[The original press release announcement can be found here.]