Call to Action: Your Support is Needed to Create a National Day of Awareness for Missing and Murdered Native Women and Girls 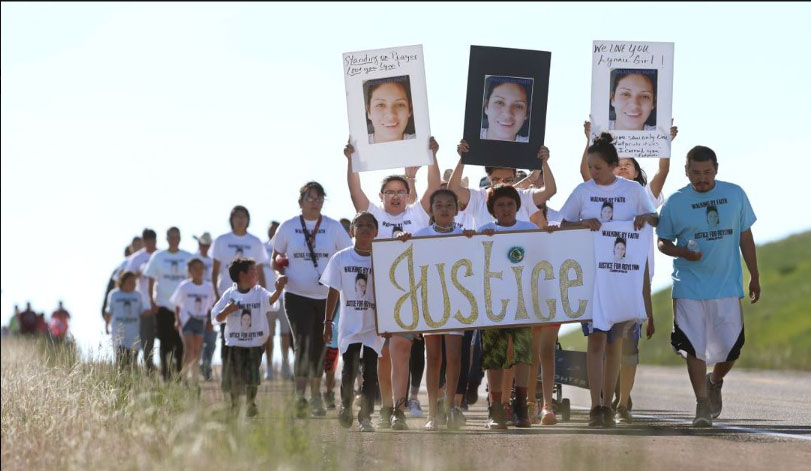 “The system is broken. I lost my daughter and know my granddaughters face the same danger. We all do.”
—Mother of a missing Native woman found murdered

In response to the recent death of RoyLynn Rides Horse at the Crow Reservation on Tuesday and the murder of Hanna Harris at the Northern Cheyenne Reservation in 2013, the Montana Congressional Delegation is taking action. Senator Steve Daines, Senator Jon Tester, and Congressman Ryan Zinke have introduced a Senate resolution calling for the creation of a National Day of Awareness for Missing and Murdered Native Women and Girls. The resolution would designate May 5, 2017, the birthday of Hanna Harris, as the National Day of Awareness.

Hanna Harris was 21 years old when she went missing on July 4, 2013. Due to the inadequate response of the justice system, her family and friends searched for Hanna. The community led a march for justice for Hanna and other unresolved murders of American Indian women.

RoyLynn Rides Horse was beaten, burned, and left for dead. RoyLynn walked several miles before collapsing. Concerned about the inadequate response of the justice system to investigate RoyLynn’s case, the Crow Tribe also led a march for justice on June 16, 2016. Early Tuesday, the day the resolution was introduced, RoyLynn passed over.

In 2005, the national movement for the safety of Native women led the struggle to include in the Violence Against Women Act a separate title for Native women called Safety for Indian Women. One of the findings that justified creation of the title was that during the period of 1979 through 1992, homicide was the third-leading cause of death of Indian females aged 15 to 34, and 75 percent were killed by family members or acquaintances. Since that time, a study by the U.S. Department of Justice has found that in some tribal communities, American Indian women face murder rates that are more than 10 times the national average.

The harsh reality of our lives as Native women is that we witness our sisters, mothers, daughters, and community members disappear and nothing is done. The National Indigenous Women’s Resource Center offers our prayers to all of the families of missing and murdered Native women and girls. Turning our grief to action we strongly support the resolution calling for a “National Day of Awareness for Missing and Murdered Native Women and Girls” to help increase awareness and shed light on the countless tragedies involving our Native sisters.

We are calling on all those concerned for the safety of Native women to support the resolution to create a National Day of Awareness for Missing and Murdered Native Women and Girls. Please follow this link to add your voices in support of the resolution, and tell Congress enough is enough.

Now is the time for action,
Cherrah Giles, Chairwoman, Board of Directors
Lucy Simpson, Executive Director