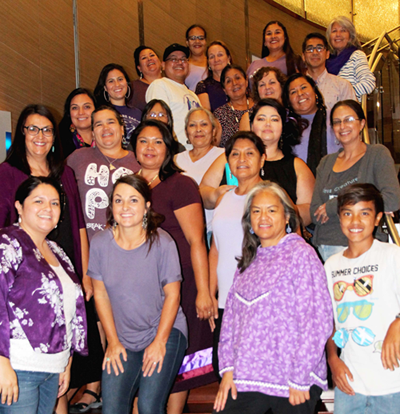 “We, along with our allies in the field, are disappointed that rather than engaging in a process to reauthorize a meaningful VAWA, Congress instead chose to push this process down the road by merely passing a continuing resolution to extend the existing VAWA through December 7, 2018,” said Lucy Simpson, Executive Director for the National Indigenous Women’s Resource Center. “Tribal Leaders and Advocates have been calling attention to gaps in the VAWA 2013 special domestic violence criminal jurisdiction provisions. We remain committed to the position that it is only through restored tribal sovereignty that we will be able to enhance the safety of American Indians and Alaska Natives. We will rise to meet the challenge of substantive policy changes that recognize the inherent sovereignty of all of our tribal nations.”

This October marks the 31st anniversary of Domestic Violence Awareness Month (DVAM), which first began in 1987 when the National Coalition Against Domestic Violence (NCADV) launched DVAM to raise awareness and connect the national grassroots movement across the United States. In 1989, Congress designated October as National Domestic Violence Awareness Month. The National Indigenous Women’s Resource Center (NIWRC) and its project, the StrongHearts Native Helpline, recognizes and celebrates the strides made by Tribes, Native organizations, advocates and allies that make up the national movement to end violence against women and children.

“We are truly humbled to support the movement by providing a national, culturally-appropriate space for victims and survivors of domestic violence to share their stories, through the StrongHearts Native Helpline” said Cherrah Giles, Board Chairwoman of the NIWRC. “Millions of Native women and men are living with the impact of relationship abuse, and every day is an opportunity to raise awareness of this critical issue. We encourage all of our relatives to show their support for survivors of abuse in their communities for Domestic Violence Awareness Month.”

As a project of the NIWRC and the National Domestic Violence Hotline, the StrongHearts Native Helpline (1-844-7NATIVE) offers peer-to-peer support and resources for American Indians and Alaska Natives affected by domestic and dating violence and is available nationwide. Now in its second year of operations, StrongHearts has established partnerships with Tribal domestic violence and sexual assault coalitions, service providers and advocates across the country.

Throughout October, NIWRC and StrongHearts will observe #N8VDVAM alongside Tribal communities, Native programs and advocates across the U.S. Since 1987, many Tribes and programs have organized DVAM activities including parades, walks, candlelight vigils, and related events in honor of the countless victims and survivors of domestic violence across Indian nations.

Tillie Black Bear was a founding mother of the NCADV and led the national and Tribal organizing efforts to help establish DVAM. DVAM evolved from NCADV’s ‘Day of Unity’ held in October 1981, which served to connect the advocates working to end violence against women and children in their respective communities. The ‘Day of Unity’ soon became an entire week of activities dedicated to raising awareness of domestic violence at the local, tribal, state, and national level. Tillie Black Bear’s leadership brought the issues of violence in Tribal communities to the national forefront. Many people consider her a grandmother of the national movement, as she dedicated her life to the safety of Native women and sovereignty for Indian nations. She died on July 19th, 2014.  NIWRC calls for your organizations support to recognize October 1, 2018, as Tillie Black Bear Women Are Sacred Day. Sign your organization on here: http://bit.ly/TillieSignOn

NIWRC and StrongHearts humbly ask all advocates, allies, media and community members to wear purple on #PurpleThursday - October 18, 2018 - as a way to lift the silence that has fallen on Tribal communities on the issue of domestic violence. Stand in support of the protection and safety of Native survivors of domestic violence everywhere and support survivors of abuse by sharing your photos on social media.

In honor of Native DVAM, you are invited to join StrongHearts’ Native DVAM Twitter Circle, “Carrying Our Traditions Forward, Leaving Abuse Behind” on Thursday, October 25, 2018, at 1 p.m. CST. Connect with our relatives from across Indian Country and Alaska - we want to hear from you! Use hashtag #DVIsNotTradish to share what DVAM and your true traditions mean to you. Everyone is encouraged to participate. Follow @StrongHeartsDV on Twitter for more details.

While there are grounds to celebrate DVAM with the increased gains in services for victims, stronger accountability for abusers, and legislation such as the Violence Against Women Act (VAWA) and Family Violence Prevention and Services Act (FVPSA) increasing safety for Native women at the tribal, state, and federal levels, much remains to be done. Most urgent is the harsh reality that Congress has failed to engage in a process to reauthorize a meaningful Violence Against Women Act, and instead just issued a continuing resolution to push the issue back to December. Tribal nations and programs must join with the national movement and use this year’s October DVAM to raise awareness that existing gaps in federal legislation impact the real world safety of tribal citizens in Indian country. Public awareness events can educate community members about the prevalence of abuse, encourage people to take action, and alert survivors to the options and resources that are available to them.