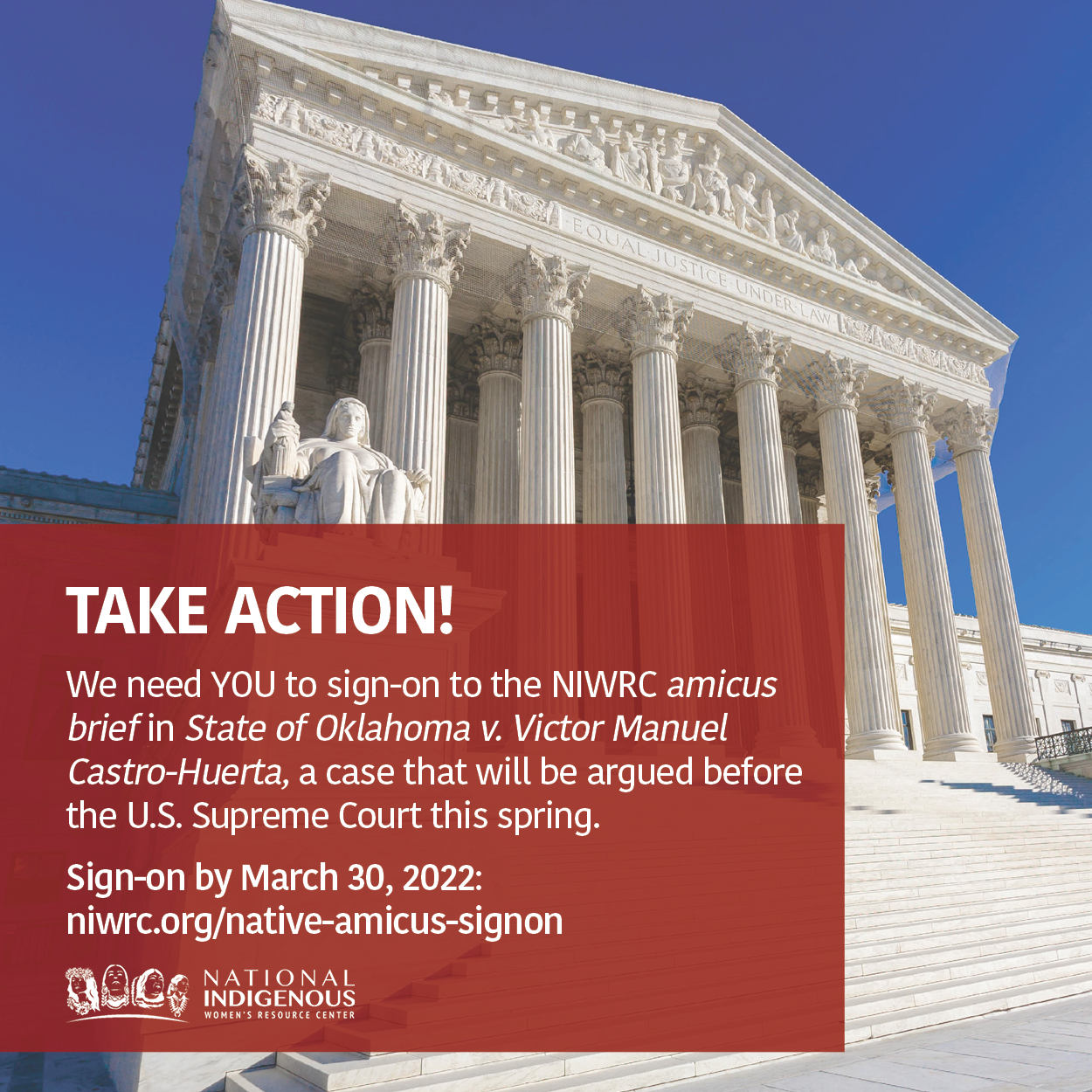 We need YOU to sign-on to the NIWRC Amicus Brief in State of Oklahoma v. Victor Manuel Castro-Huerta, a case that will be argued before the U.S. Supreme Court this spring.

WHO: The NIWRC is seeking the support of amici similar to those who joined the NIWRC on the briefs filed in Dollar General, Bryant, Voisine, Standing Rock Sioux Tribe, et. al., v. Army Corps of Engineers, et. al., Murph, McGirt, Cooley, and Denezpi. Specifically, the NIWRC is requesting signatories from organizations and/or non-profits whose mission is to end or eliminate domestic violence and/or sexual assault or address MMIW/MMIP. The NIWRC will give special focus to state and Tribal coalitions whose mission is to end domestic violence against Native women and children in Indian Country and off Tribal lands, including in urban areas. The NIWRC’s recent amicus briefs have garnered the support of more than 100 signatories each time. The NIWRC has no reason not to expect similar support here.

WHY THIS CASE MATTERS: On January 21, 2022, the Supreme Court granted the State of Oklahoma’s petition for writ of certiorari in State of Oklahoma v. Victor Manuel Castro-Huerta, a case out of the Oklahoma Court of Criminal Appeals. Castro-Huerta is a non-Indian convicted for committing child abuse against an Indian child on the Cherokee Nation Reservation. Castro-Huerta is one of more than thirty petitions that Oklahoma filed asking the Court to reconsider McGirt or narrow the implications of the decision by granting the State of Oklahoma jurisdiction over crimes committed by non-Indian perpetrators, against Native victims on Tribal lands. Notably, the Cherokee Nation and the Muscogee (Creek) Nation filed amicus curiae briefs urging the Court to deny Oklahoma’s petition.

The Supreme Court limited the case to one question, wherein Oklahoma asks the Court to grant it criminal jurisdiction over crimes committed by non-Indians against Indians on Tribal lands. As part of their continued efforts to narrow the Court’s ruling in McGirt, Oklahoma’s petition asserts that the State needs concurrent jurisdiction in order to protect Native victims and argues that the “Court has never squarely held that States do not have concurrent authority to prosecute non-Indians for state-law crimes committed against Indians in Indian country.”

The NIWRC’s amicus brief will argue that Congress has exclusive power to decide which sovereign exercises criminal jurisdiction over crimes committed on tribal lands, and furthermore, Congress has historically tried granting States this jurisdiction (for instance, in PL-280) and that has only led to fewer resources on Tribal lands to combat violence against Native people. Congress is now focused on restoring tribal criminal jurisdiction (ie, VAWA) over these crimes committed by non-Indians, and the Supreme Court should not interfere with Congress on this important policy decision.

QUESTIONS: If you have a question about whether your organization should join this brief, please email the brief’s author, Mary Kathryn Nagle, at mary.kathryn.nagle@gmail.com.