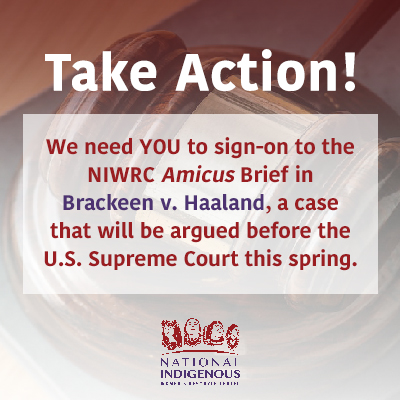 We need YOU to sign-on to the NIWRC Amicus Brief in Brackeen v. Haaland, a case that will be argued before the U.S. Supreme Court this spring.

WHO: The NIWRC is seeking the support of amici similar to those who joined the NIWRC on the briefs filed in Dollar General, Bryant, Voisine, Standing Rock Sioux Tribe, et. al., v. Army Corps of Engineers, et. al., Murph, McGirt, Cooley, Denezpi, and Castro-Huerta. Specifically, the NIWRC is requesting signatories from organizations and/or non-profits whose mission is to end or eliminate domestic violence and/or sexual assault against Native women and children. The NIWRC will give special focus to state and tribal coalitions whose mission is to end domestic violence against Native women and children in Indian Country and off tribal lands, including in urban areas. The NIWRC’s recent amicus briefs have garnered the support of more than 100 signatories each time. The NIWRC has no reason not to expect similar support here.

WHY THIS CASE MATTERS: On February 28, 2022, the Supreme Court announced that it granted certiorari to consider the Fifth Circuit Court of Appeals’ ruling in Brackeen v. Haaland, a case that concerns the constitutionality of the Indian Child Welfare Act (“ICWA”). The Fifth Circuit, sitting en banc, determined that several provisions of ICWA are unconstitutional.

While all of the challenges to ICWA’s constitutionality present concerns for NIWRC and NIWRC’s work, the equal protection arguments are the most troublesome. On December 8, 2021, the individual plaintiffs (i.e., the adoptive parents) filed a brief before the United States Supreme Court, asserting that:

ICWA operates as a unified scheme that places “Indian child[ren]” in a disfavored position, depriving them of a placement decision based on their best interests, and instead requiring placements based on the child’s “biolog[y].” 25 U.S.C. § 1903(4). And it categorically places non-Indian adoptive parents such as Individual Respondents last in line to adopt an Indian child . . . . As a result, ICWA disadvantages vulnerable children because of their ancestry—even if they have no other connection to the tribe—making it more difficult for those children to find permanent, loving homes . . . . This Court has already noted the “equal protection concerns” that ICWA raises. Adoptive Couple, 570 U.S. at 656 (declining to adopt an interpretation that would allow a biological parent to “play his ICWA trump card at the eleventh hour to override the mother’s decision and the child’s best interests”).

These equal protection arguments are concerning because, if upheld by the Supreme Court, they will undermine the ability of Tribal Nations to exercise their inherent sovereignty to protect their children. And of equal importance—but of specific concern to the NIWRC—if upheld by the Court, these arguments threaten to undermine the constitutionality of the Violence Against Women Act’s Section 804. If “Indian” is declared a race-based classification, then all federal statutes relying on the word “Indian” to refer to a tribal citizen will trigger strict scrutiny—a  constitutional test that is nearly impossible to pass. The irony of this, of course, is that if “Indian” is declared to be an impermissible race-based classification, then Congress would be left unable to restore the tribal jurisdiction that the Court erased in Oliphant when the Court held that Tribes could no longer exercise jurisdiction over non-Indians.

NIWRC’s amicus brief will educate the Court on how and why the Framers of the Fourteenth Amendment never intended for equal protection to restrict Congress’ ability to effectuate the federal government’s trust duty and responsibility to Tribal Nations and their citizens, and finally, how a decision declaring “Indian” to be a race-based classification would significantly undermine safety for Native women and children. In addition to these legal arguments, the brief would also focus on how the placement of Native children in state-run foster homes leaves them vulnerable to other crimes such as sex trafficking, as well as the high rates of abuse Native children face in state-run foster homes. Overall, the NIWRC’s amicus brief will contribute a powerful and important voice supporting the constitutionality of ICWA.

Individual survivors who have survived abuse in a non-Indian foster or adoptive home are invited to sign onto the NIWRC amicus brief as an individual and share your story. We understand that sharing one’s story can be triggering and re-traumatizing, and thus we acknowledge that it may not make sense for all survivors to come forth and share their story at this time or in this format. However, if you are someone who survived abuse in a non-Indian foster or adoptive home, please know you are invited to email Mary Kathryn Nagle (mary.kathryn.nagle@gmail.com) to discern whether it is right for you to add your name to this brief. We will respect any decision a survivor makes with regards to joining or declining to join the brief.

QUESTIONS: If you have a question about whether your organization should join this brief, please email the brief’s author, Mary Kathryn Nagle, at mary.kathryn.nagle@gmail.com.