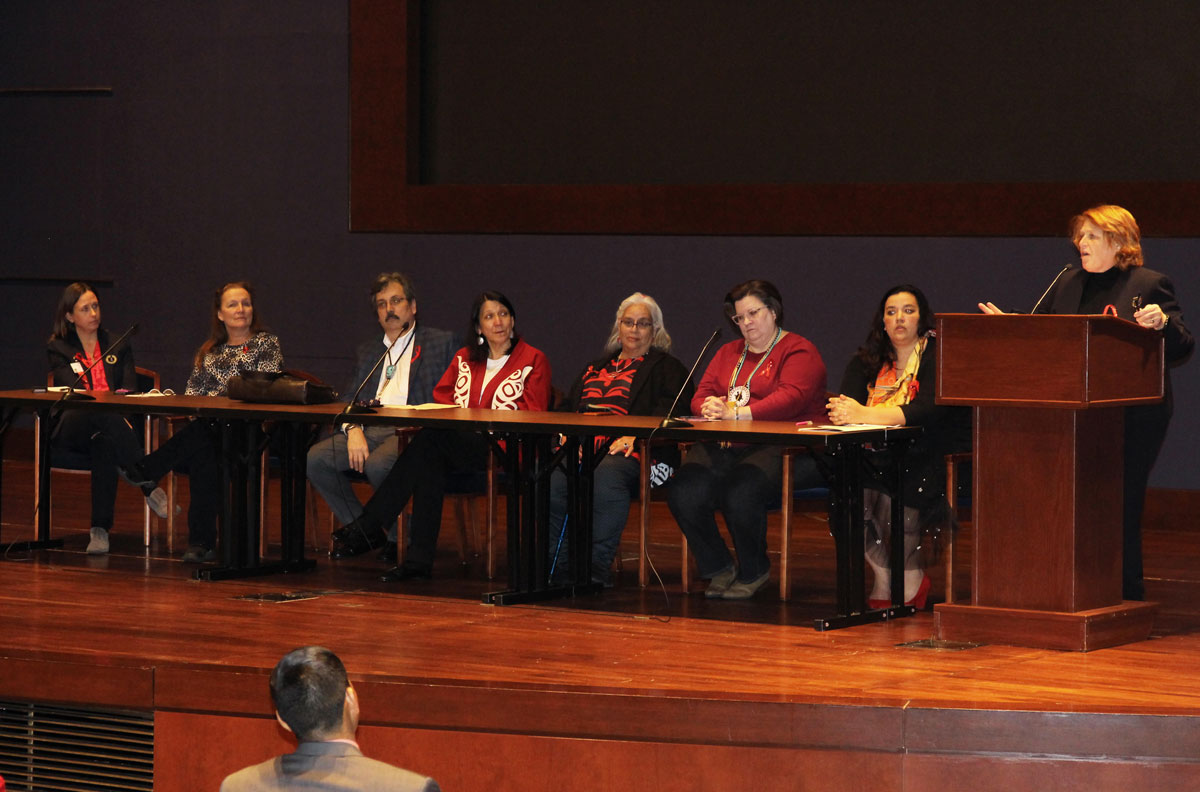 Safety for Native Women Explored at Various Events In DC

In order to raise awareness of the crisis of missing and murdered native women and girls, the NIWRC and partners, were approached by Congresswoman Norma Torres’ office to host a reception, briefing, and educational showing of the feature film Wind River (written and directed by Taylor Sheridan). The event itself was well attended by hill staffers, tribal leaders, and advocates from across the country who are actively engaged in addressing the issue of violence against native women.

The event was timely. The Violence Against Women Act is set to expire in 2018 and Native women are incredibly vulnerable, experiencing violence at astronomical rates:

More than 4 in 5 American Indian and Alaska Native women (84.3%) have experienced violence in their lifetime, including:

For an in-depth overview, "Safety for Native Women: VAWA and American Indian Tribes" is available at niwrc.org

For the 56.1% of Native women who reported having experienced sexual violence, those same women also reported that 96% of this violence was perpetrated by at least one non-native perpetrator. Wind River is but one illustration of the pervasiveness of this violence. The movie depicts the sexual assault and ultimate murder of an 18-year-old on the Wind River Reservationv by a non-Native. It highlights the jurisdictional complexities that Native women and their families must navigate in instances of violence. Due to a United States Supreme Court Case, Oliphant v. Suquamish (1978), tribal nations, even as sovereigns, were stripped of their inherent authority to prosecute non-natives for crimes committed on tribal lands. The Violence Against Women Act of 2013, effectuated a narrow Oliphant Fix. Implementing tribes are now able to prosecute non-natives for dating violence, domestic violence, and criminal violations of orders of protections. The violence must occur on tribal land, the defendant must have significant ties to Indian Country, and the tribe must provide for certain defendant rights that largely track the Bill of Rights.

Monday was a day of action dedicated to raising awareness on these issues and on key legislation, such as the Violence Against Women Act. The National Congress of American Indians hosted the Task Force on Violence Against Native Women at their Executive Session, which was followed by a Conversation With The Field: Understanding Sexual Assaults in Tribal Communities within the Context of Intimate Partner Relationships by the NIWRC. Importantly, the Senate Committee on Indian Affairs hosted a Listening Session on gender-based violence in Indian Country.

Congresswoman Torres’ (D-CA) has introduced a bill in the House of Representatives, called Savanna’s Act, which was first introduced in the Senate by Senator Heidi Heitkamp (D-ND) on October 5, 2017. Heitkamp introduced the bill after a pregnant Savanna LaFontaine- Greywind was found murdered in the Red River, her newborn child having been crudely removed from her body pre-mortem. The child was later found in the possession of Savanna’s killers and is now reunited with her father. Savanna is sadly one of countless Native women and girls who have gone missing or who have been murdered. In North Dakota alone, 125 cases of missing Native women were reported to the National Crime Information Center. Sadly, this number is widely accepted as lower than the reality given that these crimes are often underreported due to the nature of distrust that Native people often have for systems and law enforcement and the failing of the legal system as applied to Native women and issues of gender based violence in tribal communities.

Savanna’s Act would improve tribal access to federal crime information databases, such as the National Crime Information Center, and would create data fields relevant to the Native population. The bill also calls on law enforcement agencies to create standardized protocols across jurisdictions to address the issue of missing and murdered, and requires an annual report to Congress. The bill has garnered strong bipartisan support in the Senate Committee on Indian Affairs and promises to do the same in the House.

The National Indigenous Women’s Resource Center hopes that this event will mobilize grassroots tribal advocates, tribal leaders, Members of Congress, and staffers towards drafting and implementing legislation that addresses the full breadth of violence against Native women and that Congress would find a way to end impunity for non-Native men who abuse Native women on tribal lands. Tribes, as sovereigns, are in the best position to care for their people; this care must include the ability to prosecute non-Natives for violence committed on tribal land. For more information, please visit niwrc.org.