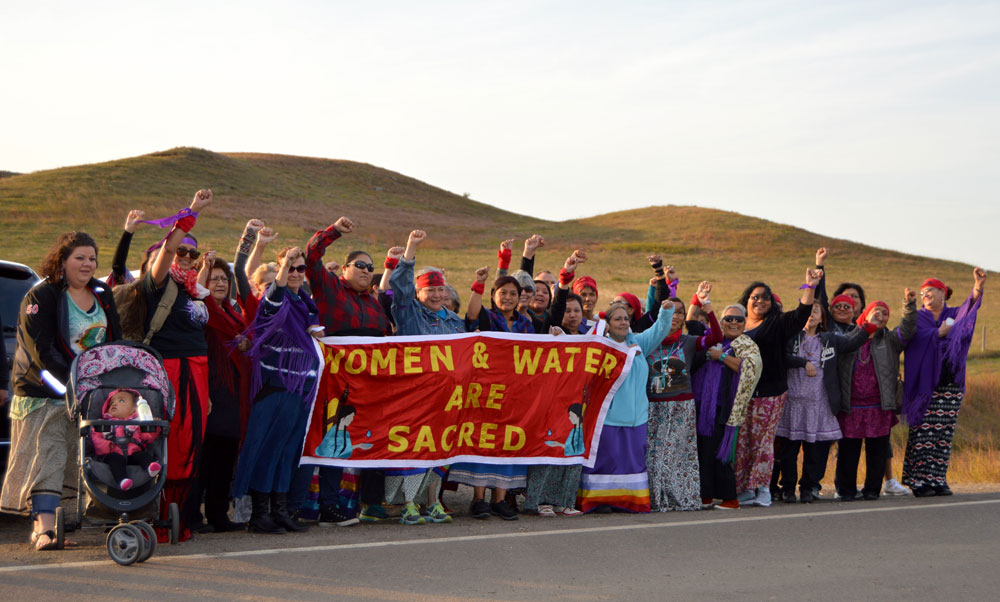 Photographer: Jacqueline “Jax” Agtuca
Caption: September 22, 2015-Women from tribal coalitions stand united on the front line at the entrance of the Sacred Stone Camp to tell the world “Water & Women Are Sacred.” The coalitions came together across Turtle Island-from the northern region of Alaska, across the United States from California to Maine, and along the southern border of New Mexico and Oklahoma to support the Standing Rock Sioux Tribe. The tribal women’s coalitions organized to increase safety for native women have member programs representing more than half of all federally recognized Indian Nations.

We, the National Indigenous Women’s Resource Center, support culturally grounded, grassroots advocacy and provide national leadership to end gender-based (domestic and sexual) violence in Indigenous communities. Given our mission, NIWRC is committed to its stand in solidarity with Standing Rock during this tumultuous time and remain steadfast in our support for the non-violent resistance that Standing Rock has manifested against the Dakota Access Pipeline.

As it pertains to NIWRC and partnering organizations, the extractive industries have a recognized, documented, and detrimental effect on Native women and children. Specifically, data shows that an increase in extractive industries regularly coincides with an increase in crimes against Native women and children, including rape, assault, domestic violence, murder and sex trafficking. Our communities suffer severely when our most valuable resources, our people and our land, are exploited. The extractive industry itself, like rape and sexual violence, forces itself on tribal lands without the required meaningful consultation with tribes as sovereign nations. In this way, the extractive industry is a perpetuation of the rape and colonization of our women and our land that has been occurring for over 500 years.

Furthermore, aside from the extractive industry’s destructive effect on Native women and children, NWIRC, as an organization that is deeply rooted in the non-violence movement, will not remain silent as to the many additional injustices that are being inflicted upon Water Protectors, both male and female, at the hands of law enforcement. Even as this letter is being written, at the front lines of the Dakota Access Pipeline, violations of basic human rights and attempts to completely suppress First Amendment Constitutional rights are transpiring at an alarming rate. NIWRC and partner organizations condemn the violent aggression against Protectors at the hands of law enforcement that occurred leading up to and on the evening of November 20, 2016, and thereafter.

On November 20, 2016, a six-hour standoff between Water Protectors and law enforcement ensued. It began as Protectors attempted to remove two charred military vehicles from the Backwater Bridge (located on Highway 1806), which were primarily serving to create a blockade between Oceti Sakowin (the main camp) and the city of Bismarck. This blockade entirely functioned to obstruct first responders and others obligated and seeking to provide emergency medical services and aide to the protectors.

The result of the blockade on November 20, 2016 was devastating for non-violent Protectors, who were confined on the bridge. While trapped, police bombarded Protectors with tear gas. In 26°F weather, police utilized water cannons to disperse Protectors, creating an onslaught of hypothermia in the camp. Concussive grenades were employed and protectors were shot in critical areas (head, face) with rubber bullets at excessively close ranges. Protectors were singled out, targeted, and assaulted by law enforcement. Ambulances and first responder services are presently being denied access to the camps. A young woman from New York suffered a severe injury to her arm due to taking a direct hit from a concussion grenade. An elder has suffered a heart attack. This excessive use of force, as perpetuated by a highly militarized police force, is criminal. The Morton County Sherriff’s department has denied use of such tactical means, though the events were heavily captured and disseminated via social media and news outlets. The consistent denial of violent tactics and suppression of peaceful assembly rights serves only to add an additional layer of trauma for the Native community at large to endure. The presence of law enforcement within our communities is meant to connote safety…. but at DAPL, no such connotation presently exists. As temperatures continue to drop, veterans are currently entering the camp to protect the people.

Long before the Dakota Access Pipeline Project, our tribal communities suffered and struggled under oppression and historical trauma. However, we have endured. NIWRC will continue to stand with the Standing Rock Sioux Tribe, a sovereign nation, in its continued fight against the Dakota Access Pipeline and the continued abrogation of its treaty rights. We urge DAPL to stop its assaults on Mother Earth. We urge the community to acknowledge the relationship between extractive industries and increased incidents of violence against women in communities impacted by extractive industries, and further, to hold perpetrators and industries accountable for these violent crimes. Finally, we urge law enforcement to honor their duties and protect our protectors, to remember that our land and our people are sacred, and to turn around and stand with us instead.