NIWRC Celebrates Contributions of Native Women Through History of the Movement 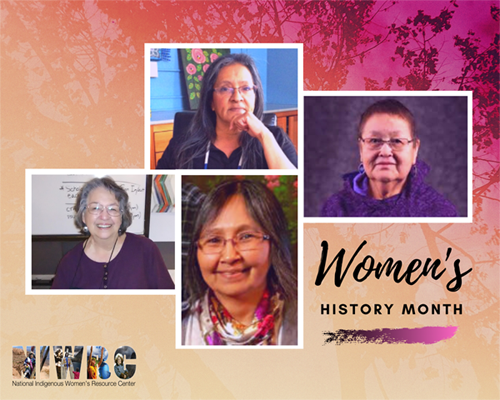 In March, organizations across the country acknowledge the vital role of women in society and history for Women’s History Month. Since 1995, each president has issued an annual proclamation designating the month as Women’s History Month. This year, the National Indigenous Women’s Resource Center looks to the celebration of Women’s History Month as an opportunity to honor and acknowledge Indigenous women who, for generations, tirelessly commit themselves to advocating for the end of violence against Native women and reclaiming the status of women as sacred. They are our Grandmothers, Mothers, Sisters, Aunts and Daughters.

We recognize and honor all of the Indigenous women working every day in their tribal communities to create safe spaces for Native women and girls yet remain anonymous. These are the women who open their homes and hearts to other Native women, their relatives who are victimized by violence and are most often survivors themselves. They are the grassroots voices of resistance, the nurturers, and the protectors. In many ways, they define what it means when we say ‘women are sacred’ by how they live. Some women have created advocacy and shelter programs, done the hard work to create legislation, locate funding sources and other resources, and educate their communities and tribal governments. For most, it is their life way.

This month, we call on everyone to look among the relatives in your community and honor those who are advocating for Native women and their safety every day. Traditionally, we are taught to stay humble in our work for our communities, but for Women’s History Month, we want to honor these women as the reason we are here today. They are the backbone and hearts of our communities.

NIWRC would also like to recognize the stronghearted efforts of the following individuals who have made a lasting impact on the movement to protect Native women and children. Each one of these women show us the strength of spirit—compassion, dedication, and courage of women acting as relatives. Our goal in celebrating the contributions of these women as part of Women’s History Month is to inspire the next generation of Native advocates to advocate for change in their communities and around the world.

Tina Olson (Yaqui) is known as a strong grassroots advocate, dedicated to ensuring the voices and expertise of Native women who are survivors remain the foundation and guidance for the work to end violence against women and their children. A founding member of Mending the Sacred Hoop, she has worked on issues surrounding domestic violence for over 30 years. Recently retired, she has provided training, technical assistance, and material development for tribes across the country, assisting in program development, implementation, and developing tribal responses to domestic violence and sexual assault. Tina has taken various roles in the work to end violence against American Indian and Alaska Native women on a local, tribal and national level: women’s group facilitator, men’s group facilitator, advocate, trainer, speaker on issues such as domestic violence, sexual assault, trafficking, and elder abuse; and helped develop Mending the Sacred Hoop’s Coordinated Community Response. She is a board member of the Duluth American Indian Commission and a board member of the American Indian Housing Program, a permanent supportive housing project. Tina is the proud mother of four daughters and nine grandchildren and lives with her partner in Duluth, Minnesota.

Shirley Moses is an Inupiaq Eskimo and was born in Nome, Alaska. A strong voice on behalf of Alaska Native Tribes and women, Shirley is currently the Executive Director for Healing Native Hearts Coalition. Shirley also worked for a statewide Domestic Violence/Sexual Assault Coalition as a Program Assistant, Shelter Director, Coordinated Statewide/Regional and Village SA/DV Training and response, and is a certified SART Responder. Shirley previously served and was appointed by U.S. Attorney General Eric Holder to sit on a 15-member National Coordination Committee to address Sexual Assault Response In Indian Country. This was a two-year appointment during which Shirley represented Alaska Native Tribal concerns and needs pertaining to sexual assault protocol. She has a Master’s in Education Administration, and approximately 20 years of experience working in the behavioral health field in various positions. Shirley taught elementary grades K-8 in rural villages throughout Alaska and was a Principal Teacher. In addition to her experience in the classroom, she has worked as a Coordinator for SED Youth in Residential and Community Settings. She has experience with coordinating care in the school, behavioral health and community settings for dually diagnosed youth and adults.

Beverly Wilkins (Muscogee Creek and Cherokee) is a mother, grandmother and great-grandmother, who has lived and worked in Albuquerque for over 61 years. She is well-known for her kind spirit and calming voice and presence. Now retired, Beverly most recently served as founding mother, volunteer advocate and director of Blue Corn Mothers Alliance, an advocacy program for Native women who are survivors of domestic violence. The program provided support, advocacy, counseling if needed, court accompaniment, referrals and other services as needed. Her recent work also involved providing training on the effects of domestic violence on children for the Coalition to Stop Violence Against Native Women in New Mexico. She has provided technical assistance and training on issues of suicide, domestic violence and related issues of child abuse, locally and in tribal communities nationwide for the Indian Health Service, Bureau of Indian Affairs, Office on Violence Against Women, Sacred Circle, Mending the Sacred Hoop, the Department of Justice, the National Indian Justice Center and the Family Violence Prevention Fund. Beverly is a founding mother of Morning Star - Advocacy Program for Native American Women, which opened in the late 1990s in Albuquerque and where she acted as Interim Director from 2007-09. Beverly has also served as the Director of the Shelter for Victims of Domestic Violence (now known as the Safe House in Albuquerque).

Joann Horn is Yup'ik Eskimo from the Village of Bill Moore's Slough and has been living with her husband in the Village of Emmonak located in the Yukon Delta Region of southwestern Alaska for over 25 years. Joann has five children and eight grandchildren. In the 1980s, Joann began working at the Emmonak Women’s Shelter as a relief advocate helping women and children and later as a rural shelter outreach coordinator traveling out to area villages and educating the community on domestic violence, sexual assault, and shelter services. Over the years, she has struggled several times to keep the shelter doors open to assure women and their children had safe housing and support. Joann is now Shelter Director managing and developing shelter operations and advocacy services and represents the shelter as a member of the Yup’ik Women’s Coalition. She received a certificate on Rural Human Services from the University of Alaska - Kuskokwim Campus (KuC) in Bethel, Alaska, in May 2010.