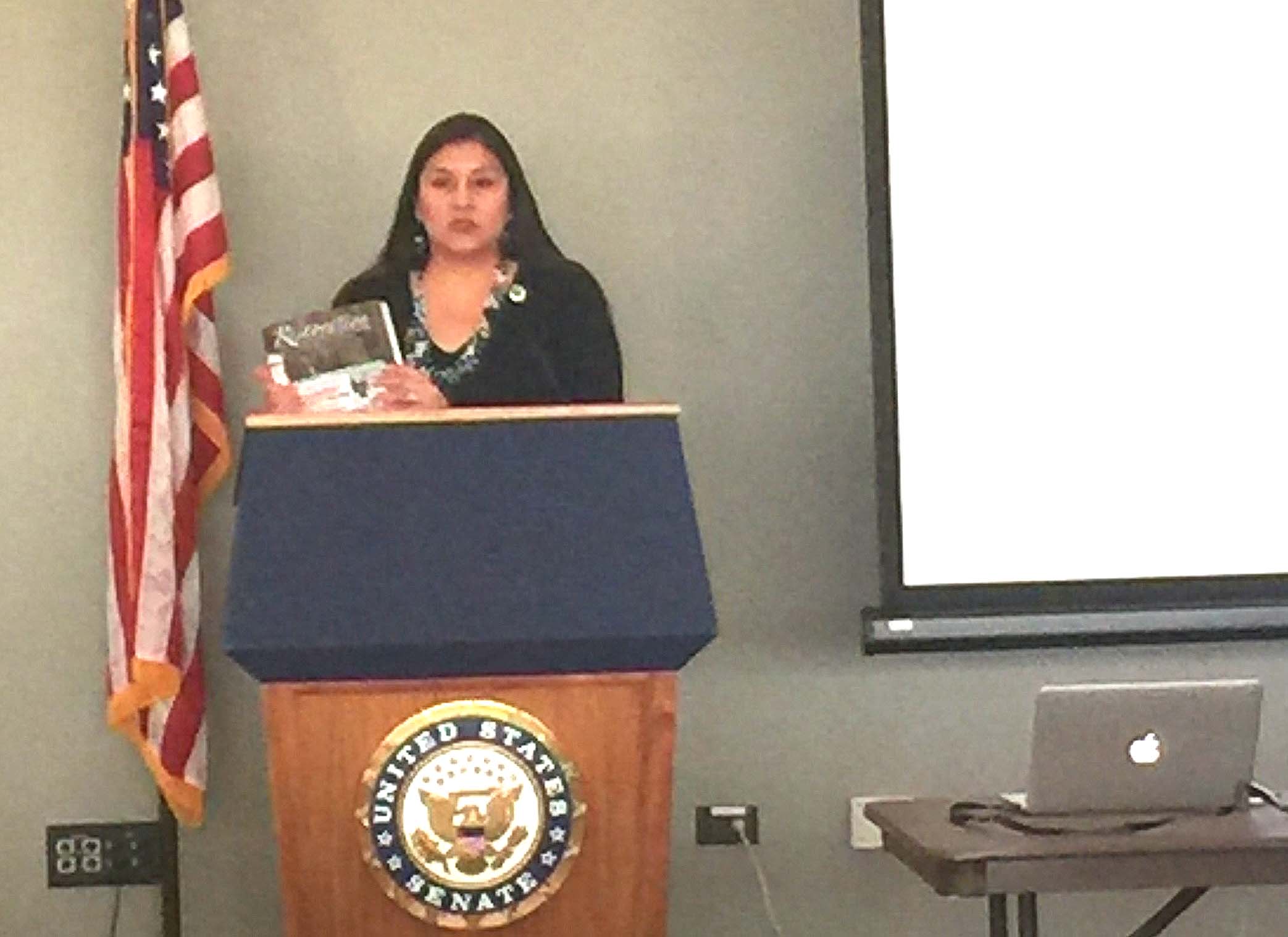 (Washington, D.C.) — The reported rates of abduction and murder of American Indian women and girls are alarming.  However, Native women advocates say too often these terrible crimes are ignored by law enforcement and the media.

“Indigenous women go missing twice—once in real life and a second time in the news” said Amanda Takes War Bonnet, Public Education Specialist of the Native Women’s Society of the Great Plains.  War Bonnet was part of a panel during the Moving Ahead In Addressing Violence Against American Indian and Alaska Native Women and Efforts to Address Missing and Murdered Native Women and Girls congressional briefing held Feb. 15, to provided legislators and the public with an overview of this urgent issue.

“These are not new crimes, but a pattern of crimes that has existed for decades upon decades,” said Terri Henry, Secretary of State, Eastern Band of Cherokee Indians, Co-Chair, NCAI Task Force on Violence Against Women, and Board Chair, Indian Law Resource Center. Henry says colonization and the policies that followed has created circumstances of vulnerability for Native women and children. “As governments, we are here today to begin the process of acknowledging missing and murdered American Indian and Alaska Native women so that as governments we can act to stop these horrific crimes.”

To help bring attention to these tragic, often undocumented crimes,  Montana Senators Steve Daines and Jon Tester introduced Senate Resolution 60 on Monday, Feb. 13 — a resolution calling for the designation of May 5, 2017 as a “National Day of Awareness for Missing and Murdered Native Women and Girls.” Senators James Lankford (OK), Cory Gardner (CO), Al Franken (MN), John Hoeven (ND), and Tom Udall (NM) co-sponsored the resolution. Speaking at the briefing, Sen. Daines noted that May 5th was chosen because it is the birthday of Hanna Harris, a Northern Cheyenne woman who went missing in July 2013 and was found murdered several days later.

“We all know someone,” said Tami Truett Jerue, Executive Director, Alaska Native Women's Resource Center. “I remember as a child hearing my mother, my aunts and their friends at the kitchen table lowering their voices and whispering about those women in our families who went missing or were murdered.” Alaska Natives are 16% of the population in Alaska, but 28% of the murder victims according to statistics.   “I hope this resolution will increase awareness and alert villages and programs to develop protocols for an immediate response. I hope it will inform the criminal justice system's response to view a disappearance for what it is-- extremely dangerous."

“Before we can address and end any injustice, we must first acknowledge the injustices,” said Cherrah Giles, Chairwoman, Board of Directors, National Indigenous Women’s Resource Center. “This Senate Resolution is the beginning of that acknowledgment. Stand with us on May 5 to acknowledge and honor Indian women who are missing or murdered. As we come to understand the roots of violence against Indian women, we can continue to remove the barriers to their safety.”

Nearly 200 tribal, national, and state organizations have supported the resolution, which calls for designating May 5, 2017 as a day to honor the lives of those missing and murdered and demonstrate solidarity with families that have lost a loved one through violence. Speakers urged participants to contact their Senators and ask them to co-sponsor the resolution.

The National Indigenous Women's Resource Center, Inc. is a non-profit organization that provides technical assistance and training, policy development and system management, materials, and resource information on violence against Native women and the development of tribal strategies and responses to end the violence. (www.niwrc.org)

About the Indian Law Resource Center

Founded in 1978, the Indian Law Resource Center is a non-profit organization established and directed by American Indians and dedicated to protecting the rights of Indian and Alaska Native nations and other indigenous peoples throughout the Americas. The Center’s Safe Women, Strong Nations project works to end the epidemic levels of violence against American Indian and Alaska Native women and children and to strengthen Indian nations. (www.indianlaw.org)

Organized in 2015, the Alaska Native Women’s Resource Center (AKNWRC) is a tribal nonprofit organization dedicated to ending violence against women with Alaska’s 229 tribes and allied organizations. AKNWRC board members are Alaska Native women raised in Alaska Native Villages and have 141 years of combined experience in tribal governments, nonprofit management, domestic violence, and sexual assault advocacy (both individual crisis and systems and grassroots social change advocacy at the local, statewide, regional, national and international levels), and other social service experience. AKNWRC’s philosophy is that violence against women is rooted in the colonization of indigenous nations.